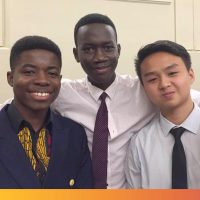 As the first speaker, Salisbury Mayor Gillian Aldridge set a warm and inspiring tone to the evening by praising the graduates for their hard work and giving each one a warm hug as they received a commemorative gift.

Following the Mayor’s enthusiastic opening to the evening, MC Rick Henke, Manager of Twelve 25, then welcomed David Nagy, General Manager Recruitment and Training Services, Maxima Group Training, who spoke of the hard work that goes into a school-based traineeship.

Deanna Rohrsheim, Manager, Education & Training of Australian Institute of Social Relations congratulated the 12 assembled students and reinforced the value of beginning their journey in the Vocational Education and Training Sector with nationally recognised qualifications.

Brenton Roy, Program and Policy Manager of Navigating Future Pathways from the Department for Education and Child Development spoke next. As one of the founding members of the Steering Committee, he congratulated both the group and the stakeholders for seeing the program into what is now its fourth year.

The Certificates of Completion were then presented by Dr Claire Ralfs, CEO at Relationships Australia South Australia as Course Coordinator Melanie Sander and Student Support Con Founten introduced the students.

Two brave students, Dakota Lindquist of Salisbury East High School, and Kamellia Forbes of Parafield Gardens, responded on behalf of the graduates and spoke of what they had gained in their time on the school-based apprenticeship program. Graduates Saraya Rigney and Amy Capel were congratulated on attaining employment at the Indigenous Land Corporation and Relationships Australia respectively.

The graduates received their parchments from the Australian Institute of Social Relations, as well as Certificates for successfully completing ProjectABLE, an interactive disability awareness workshop run by the National Disability Service.

The Department for State Development, who supported the founding partnership between the Australian Institute of Social Relations, Department of Education and Child Development Maxima and the City of Salisbury Twelve25 Youth Enterprise Centre, is funding the program once again, under their WorkReady program. An enthusiastic cohort of 15 new students commenced on Tuesday 27 March, 2018 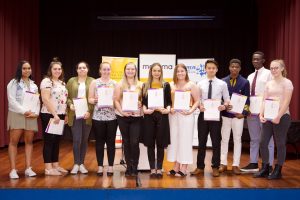